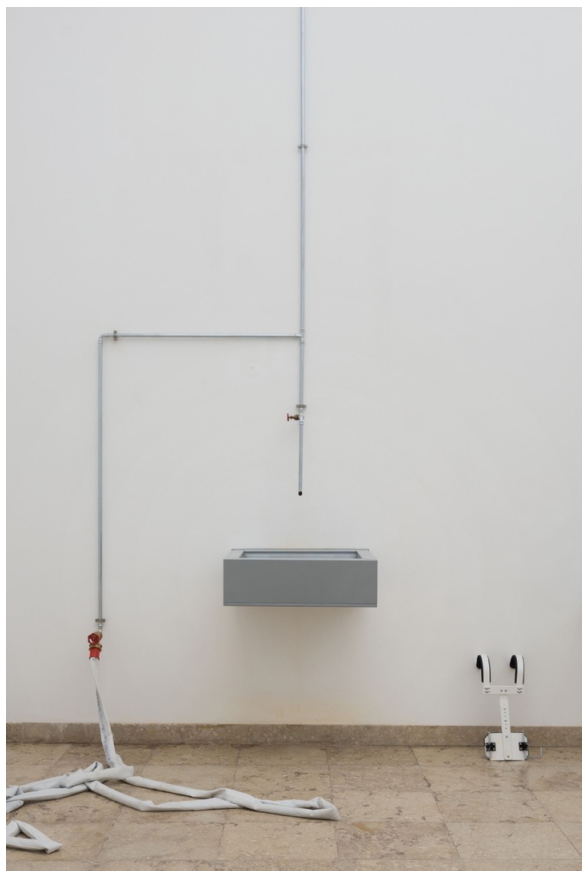 "In one of the small rooms, an industrial sink and a hose—like those you could find in a slaughterhouse, a prison, or a morgue—have been placed next to an electric guitar plugged to pedals and an amp, which looks simultaneously incongruous and perfectly fitting to the scene. The pavilion reeks of sanitary disinfectant, the type of smell that brings bad memories of hospital nights and days at the nursery."

lives and works in Berlin

After studying Visual Communication at Hochschule Offenbach, Anne Imhof continued her studies at Städelschule Frankfurt from 2008 to 2012 in the class of Judith Hopf. The artist lives and works in Berlin and Paris.

Imhof's artistic work comprises elements of painting, performance and drawing. In her performances, that often last several hours, she collaborates with a returning cast of performers such as her partner Eliza Douglas. Through body language and repetitive gestures they investigate relationships and dislocations of power. In 2015 Imhof was awarded with the Preis der Nationalgalerie für junge Kunst for her performance Rage. In 2017, Faust, her presentation at the German pavilion won the Golden Lion. In it, performers moved over and under the glass floors that had been constructed throughout the space, performing seemingly banal, improvised movements. Despite the material used visitors were not able to overlook the whole scenario which amplified the impression of action taking place outsided of concrete production.