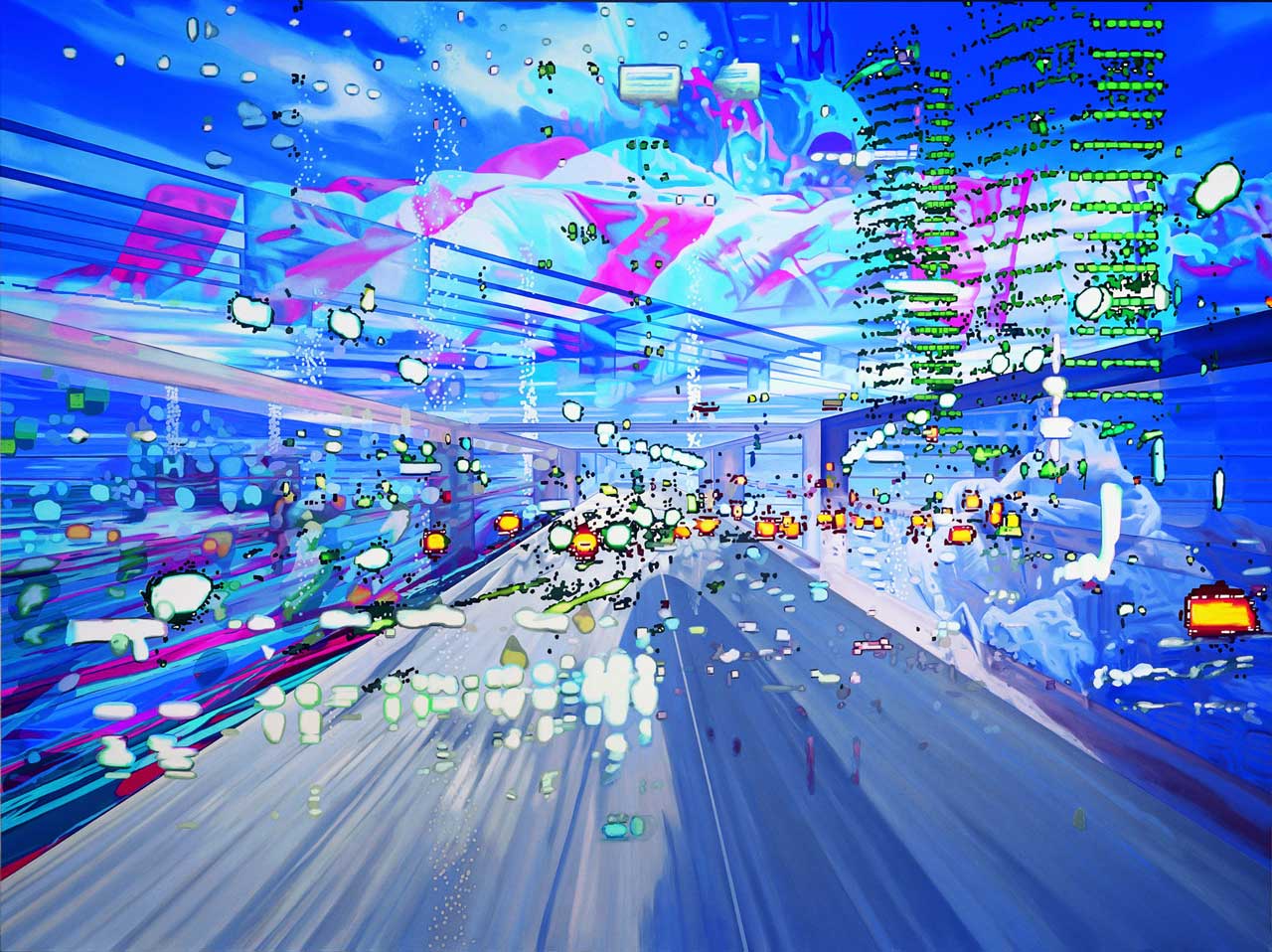 “Tinted in cold hues of blue the oil painting on wood depicts sweeping corridors of space […] in an urban setting with roads and buildings […]. Wasmuht’s lengthy painting processes and the superimposition of different frames of reference manifest a form of digitalization in analog painting that first comes into being in the eye of the beholder. Her images are interpretations of nature and culture, but also interferences, positive disruptions of history and media. Wasmuht avoids superficial gestural subjectivity, but instead uses a calculated and sober objectification of perception - a penetrating examination of and a metaphor for coldness, both in her motifs as well as in their social context.”

Corinne Wasmuht
born 1964 in Dortmund
lives and works in Berlin

Corinne Wasmuth, today considered to be one of the most important German artists of her generation grew up as the daughter of a German engineer in Peru and Argentina. From 1983 to 1992 she studied at Kunstakademie Dusseldorf. Since 2006 she is a professor at Kunstakademie Karlsruhe.

“Corinne Wasmuht’s new large-scale paintings of recent years open new dimensions of perception. Having grown up in Argentina, the artist creates multi-dimensional pictorial spaces, appear familiar to us through the possibility of non-synchronous and the different when using electronic media. However, light, time, colour, architecture and nature are of great importance as well as her large archive of countless photographs. Taking collage-like combination and composition of the photographic materials Wasmuth develops motifs for her paintings which she at the end of the decision making process transfers as a preliminary sketch onto the painting support. Similar to reverse glass painting Wasmuht’s images are applied layer after layer working from light to dark to a bright background. Even on the final layer countless flares are flashing up. The result are images of old masterly technique, executed on wood, in which snapshots of our urban-architectural as well as landscape environment converge. Even though fragments of our everyday realities remain visible, fascinating, strange spaces and environments emerge in which scenes seem to float next to each other without syntax connection. They resemble strangely emotionless reality bits like when a pair of ownerless jeans move through the image running. Or when the fragments of a tiled floor create reflections like a fata morgana of a dark abyss all the while creating their own perspective order. Architecture, body and spaces are presented as autonomous entities in these images, only connected loosely at certain points by refined gradations of colour temperature that sometimes drifts into glittering toxic chasms. Porous and fragile, these pictorial spaces seem to be about to dissolve – or are they just about to reconfigure a new, unknown reality?”