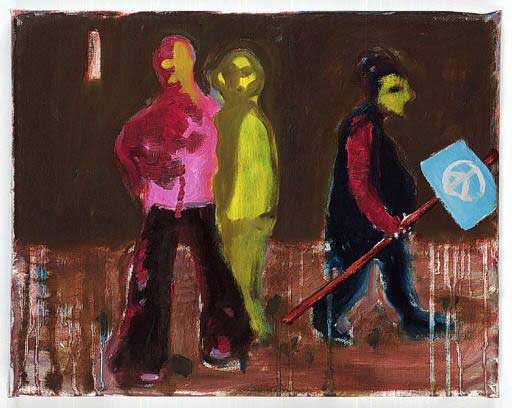 “Daniel Richter first became known for his large-scale paintings that he developed out of a provocative renewal of abstraction. The artist then changed to figurative representations which Richter justified with an extremely complex argumentation. The political symbolism of his figures […] served as a rather surprising proof that even today painterly allegory is possible. A much more prominent aspect of his paintings can however be found in the multitude of stylistic means from earlier epochs which some viewers consider to be brilliant while to others they appear suspect and arbitrary. […] Small formats can be of particular advantage as they break up mastery and make the problem of painting become apparent. They are Richter’s ideas, studies and compositional drafts that sometimes became starting points of his large paintings but more frequently remained simple ideas. In their diversity they demonstrate a wide-reaching engagement that in its juxtapositions asks questions of possibility.  As “background pieces” that make the complexity of large images and their production process visible and demonstrate a complicated handling of the stylistic, historical and social categories of painting.”

Daniel Richter
born 1961 in Eutin
lives and works in Berlin, Hamburg and Vienna

From 1991 to 1995 Daniel Richter studied at the University of Fine Arts Hamburg with Werner Büttner and worked as an assistant to Albert Oehlen. From 2004 to 2006 he was professor of painting at University of the Arts Berlin and in autumn 2006 took over the professorship for "Expanded Pictorial Space" at the Academy of Fine Arts Vienna. In 2009 Daniel Richter was awarded with the art price Finkenwerder, one of the highest-paying awards in Europe.

“Daniel Richter is considered to be one of the most important artists of his generation. Continuously questioning the possibilities of painting is his method. He gives the reason himself, “I do not believe in technique. Painting is a form of thinking and you have to make the things you need for such a form of thinking obedient to you.” The continuous development of an ever new, changing pictorial language is a way to work against his own routine. Around 2000 he started to juxtapose the abstract-ornamental paintings of the mid-1990s with large-scale figurative images of social and political realities and in this way led history painting into the present. By going back to the current mass media image production, but without illustrating or commenting on the events, his broken Mannerism points to the decline of social utopias.”