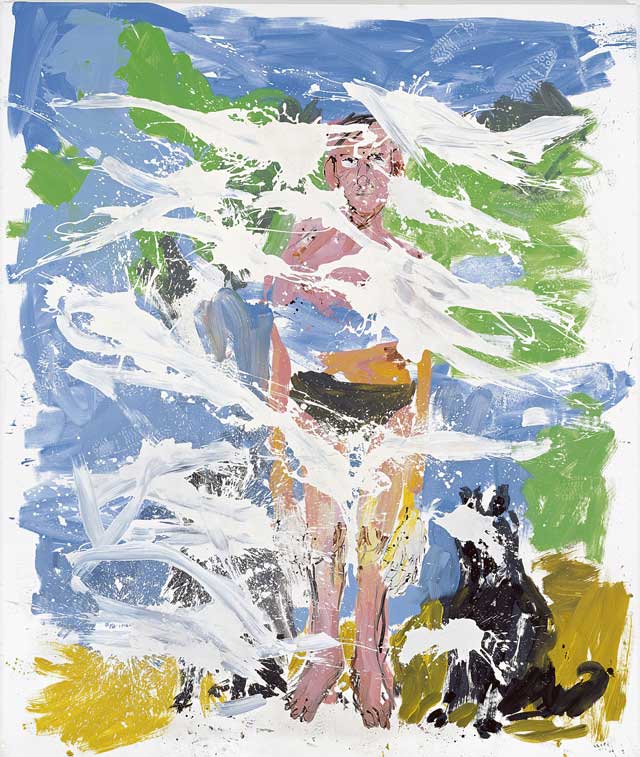 “The original version [of the work B. für Larry from the 1960s] a half-joking homage, was based on a misunderstanding. When Baselitz first saw the works by the American artists Larry Rivers and Jasper Johns, he was very impressed by Johns. But since he mixed up the names, the image for Jasper became an image for Larry. This is the surprising reason for the two versions as well as their development process which took place between 1967 and today. […] With a sleepwalker’s certainty Baselitz achieves a highly complicated connection between different image layers in the new version that surpasses Jasper Johns’ surface-oriented all-over technique considerably. While the white version seems to withdraw into the image’s interior, the black version extends outside towards the viewer in interwoven layers. The virtuous combination of figuration and abstraction, of back and foreground resemble processes of digital image making. The result does not paraphrase the original but is a conceptually new work that works according to methodically different rules.”

In 1956, Georg Baselitz began his studies at the Academy of Fine Arts in Berlin-Weißensee (East Berlin), from which he was expelled after only two semester due to “socio-political immaturity”. In 1957, he was able to continue his studies at the Academy of Fine Arts in West-Berlin with the Abstract painter Hann Trier. In 1958 he permanently moved to the West where he began to study the theories of Wassily Kandinsky, Ernst Wilhelm Nay and Kasimir Malewitsch as well as the art of mental health patients from the Prinzhorn collection. In 1963 the first solo exhibition took place in the Berlin gallery Werner & Katz. The two paintings Die große Nacht im Eimer and Der nackte Mann were confiscated by the prosecution due to sexual obscenity.

In his search to find a way of deconstructing the image Baselitz turned the motif of his so-called Fracture paintings by 180 degree. He became world-famous for these upside-down paintings from the mid-1970s on. In addition to his paintings he produced an extensive oeuvre of prints. In 1979/89 he began to create rugged, colourfully-painted, seemingly archaic wood sculptures. From 2005 he began the Remix series in which he reinterprets selected works from the past years.