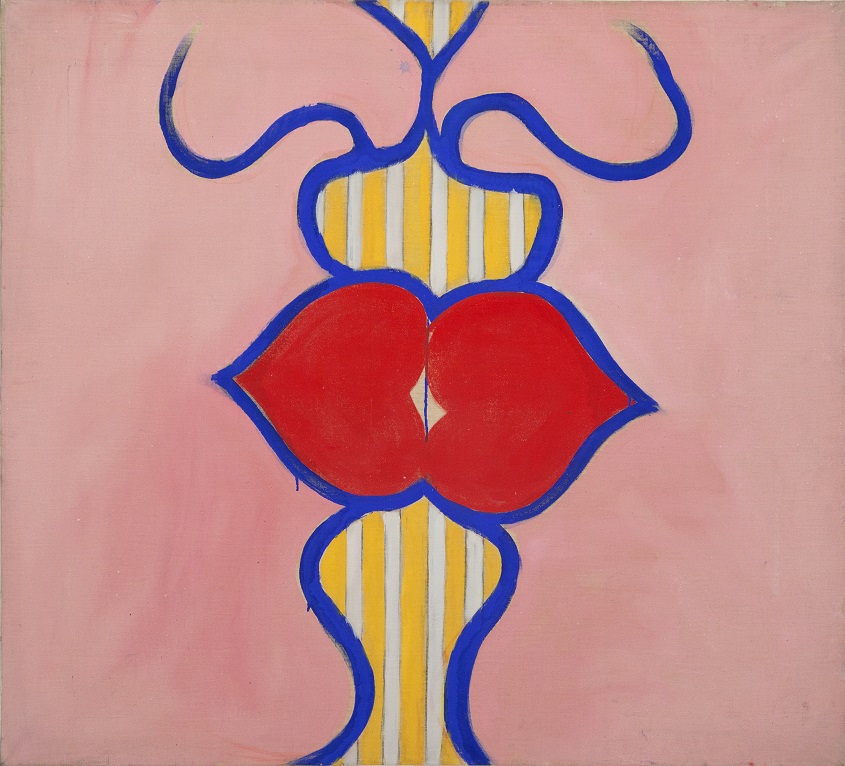 "The first works Lueg made after the aesthetic break with Rauschenberg and Twombly, and with the gesture and ecriture learnt from Götz, was a female torso with a two-colored, patterned bikini, juxtaposed with a two-colored parasol. This was followed by footprints made from a template and a picture called "Kuss" on a pink ground, which combined expressionless planes comprising two red lips, two pink halves of a face, and a yellow and white striped pattern."

As he was not represented by a gallery, Konrad Lueg started to organize exhibitions himself together with his artist friends Manfred Kuttner, Sigmar Polke and Gerhard Richter. In early spring 1964 the so-called Vorgartenausstellung (Front Garden Exhibition) took place at Galerie Parnass, Wuppertal which would go on to enter the mythologies of German post-war art. The third action of the Capitalist Realism group founded by Richter, Polke, Kuttner and Lueg took place on short notice in the front yard of the reknowed Galerie Parnass owned by Rudolf Jährling. The artists placed around thirty to fourty of their works against bushes, garbage cans and handrails inside the snowed in garden, the work "Kuss" was among them. The campaing proved to be a success- later in the same year Jährling gave Polke, Richter and Lueg an official group show called "Neue Realisten" in his gallery.

Konrad Lueg is the pseudonym under which the painter-later-turned-gallerist Konrad Fischer worked until 1968. He took on his artist name - his mother's maiden name - when he was still a student in order to avoid mix ups. From 1958 to 1962 Lueg studied together in the classes of Bruno Goller, Karl-Otto Götz and Teo Otto at Kunstakademie Düsseldorf which was also the place where he met Gerhard Richter, Sigmar Polke and Manfred Kuttner. Together they founded the Capitalist Realism movement, on one hand an ironic play on the Socialist Realism prevailent in the Eastern Bloc and on the other a way to critique the brave new consumer world of the west through their art works and exhibition making.

Using his birth name, Konrad Fischer opened the legendary eponymous gallery in Düsseldorf in 1967 where he, together with his wife Dorothee, represented American minimal and concept artists and introduced the movements to German audiences. One year after the opening he decided to quit his artistic career as Konrad Lueg for good.