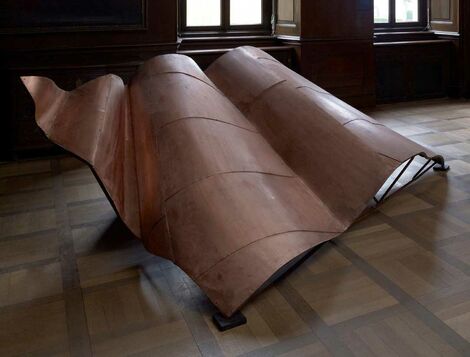 “In his monumental piece We the People Danh Vō investigates the notion of freedom. The copper elements are from a Chinese original reproduction of the New York Statue of Liberty. Explicit details such as the 2mm thin copper skin of the statue encourage considerations of stability and autonomy […].”

Gregor Jansen, in: 10 Jahre Sammlung Rheingold - Orchesterwechsel, brochure for the exhibition at Schloss Dyck in Jüchen 2012 of the same name, curated by Gregor Jansen, p. 10

Born in Vietnam in 1975 Danh Vō grew up in Denmark after his family had been rescued by a Danish fright ship on their flight on a self-made boat in 1979. Vō studied at the Royal Academy in Copenhagen and at Städelschule in Frankfurt and lived in Berlin for eight years. In 2007 he was awarded the Blauorange-Prize, the art prize of Deutschen Volksbanken und Raiffeisenbanken. In 2012 he was awarded the Hugo-Boss-Prize. In 2009 Danh Vō exhibited at Kunsthalle Basel and various group exhibition. In 2015 he was invited by the French collector Sammlers François Pinault to curate an exhibition at Punta della Dogana during Venice Biennale.

“In his objects, installations, photographs and works on paper Danh Vō combines the personal experiences of his childhood in Vietnam with his family history, their flight to Europe and questions of colonialism, migration and cultural identity. Further important issues of his artistic practice are same-sex relationships and more generally questioning of normative behaviour both within society at large as well as the art world in particular. Again and again he succeeds at creating pieces of iconic poignancy such as his copies of the original American flag with thirteen stars – that was once designed in order to celebrate America’s independence from colonial powers and that Danh Vō transferred to carton in gold paint- or his already mentioned long-term project of a reproduction of the Statue of Liberty in thin copper divided into singular pieces.

His Oma Totem, assembled from a washing machine, fridge, tv and crucifix was one of the crowd pleasers of his group show. These objects, that were given to the artist’s grandmother upon arrival in Germany in the 1970s by the immigration authorities do not only explain what was considered elemental from a Western European perspective at the time. In the way that Danh Vō arranges them on top of each other they also become a visual metaphor of cultural self-definition.

In reference to his work Danh Vo places his Tombstone for Nguyen Thi Ty a floor relief of marble and granite that transfers washing machine, fridge and tv into what according to the title is a tombstone fitted with a wooden cross and bronze Jesus. After transferring his dead grandmother from Germany to the family grave in Copenhagen, the piece will no longer be an artwork but serve as a tombstone.

Again and again Danh Vō draws from his own or from his family’s history and involves direct relatives such as his father Phung Vō in the production of his works. Among others he worked on an edition of letters for which he by hand copied a goodbye letter from the nineteenth century written by the French missionary Jean-Théophane Vénard to his father shortly before he was executed. The number of editions is based on the number of orders and will only become definite after the death of Danh Vō’s father.

He also referred to his father in an installation for Berlin Biennale. There he used display cases to display his Rolex watch – bought with the rest of the gold that his father had used to finance the flight from Vietnam-, his Dupont lighter – bought with the first money earned in the new home – as well as his signet ring. All three objects stand for the longing for Western signifiers of wealth as well as their global reach and presence.

The supposed attraction of material Western values is not just represented in Danh Vō’s works through high-end consumer products. Products like Coca Cola […] may just as well be understood as temptation. Similar to the way in which fairy tales and stories of saints controlled people with their promise that heaven waited after a humble and frugal life, nowadays products and status symbols deflect from important social and political problems. In the way he turns such values upside down Danh Vō, who instead of press releases sometimes prefers to hand out handwritten copies of Cinderella, can be compared to artists like David Hammons and Félix González-Torres. All of them have made art history with their insightful, political pieces and expanded the Eurocentric view significantly.”