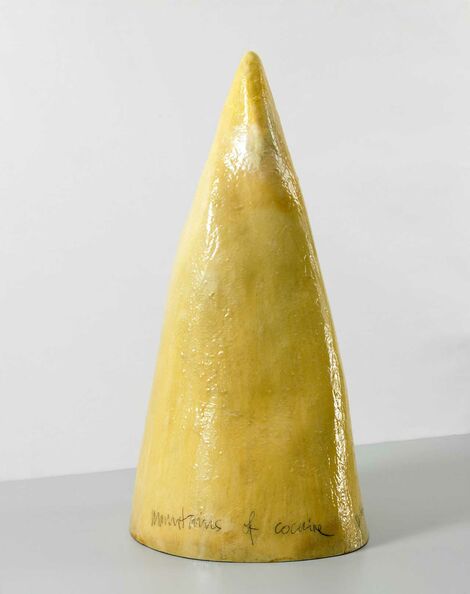 “Before studying fine art in Munich and Hamburg, Georg Herold finished a two-year blacksmith apprenticeship in the GDR which might help to explain the artisanal straightforwardness as well as the precise effect of his sculptures, paintings and installations. The vehemence, with which Herold piles up a crematorium-like chimney (Schlot (Im Arsch ist’s finster)), 1984, fixes a thick pack of timber beams against the wall (Das dicke Licht, 1986) or erects a Mountain of Cocaine (1990, made from polyester), comes out of a direct, almost craftsman-like approach to materials and objects.”

Georg Herold
born 1947 in Jena
lives and works in Cologne

After a blacksmith apprenticeship in the former GDR from 1977 to 1983 Georg Herold studied at the University of Fine Arts in Hamburg under Sigmar Polke. During the early 1980s he challenged the art market boom of the period together with Albert and Markus Oehlen, Werner Büttner and Martin Kippenberger. Later on he distanced himself from the “Young Wilde Ones“ group and developed his own Minimalist style by using simple materials of everyday usage such as roof batten and bricks. Since 2000 Herold is professor of sculpture at the Kunstakademie Dusseldorf.

“Herold is not a painter, even though he makes images, no sculptor, even though he creates sculptures and installations, no architect, even though he builds. He personifies the negation of artistic practise as defined by academic tradition. All of his works are based on principles of collage and montage. Their unwieldy character is due to a combination of elements that do not fit together. Not innovation and originality are of primary concern but difference and opposition. This art is entirely conceptual, it does not seek to absorb the viewer but instead builds barriers to understanding. In return, it provides formal clarity and intellectual fascination whereby the unfathomable, the grotesque, the anarchistic as well as the frivolous, arcane and banal are revealed. Wit and irony characterise many works and sometimes also shenanigans and pure nonsense. The denial of any catchy moment, the trivial materiality, imperfection as criterion of higher accomplishment, the make-shift aesthetic, the utter suppression of appealing sujets, the hermetic appearance of some installations, the relishing quotation of the superficial, the play with the equivocal, abstruse, paradox characterize his life just as much as astounding word plays, neologisms and shifts in meaning. The many links to Dadaism and Surrealism are obvious.”