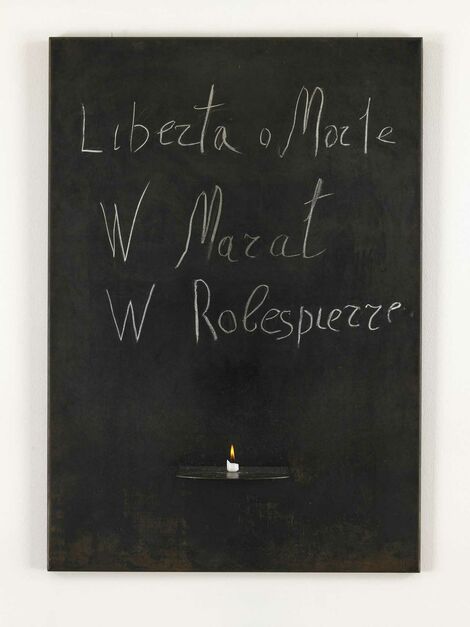 "On the epitaph-like board measuring 100 x 70 centimetres Kounellis has written in unassertive, self-effacing hand writing underneath the slogan "Liberta o Morte" – Freedom or Death- the names of two protagonists of the French Revolution: Marat and Robespierre who enforced their social utopias with terror and then were murdered themselves. The flickering, continuously burning candle does not simply serve as a traditional memento mori but likewise as a – if weak – flame of the Enlightenment. "Liberta o Morte" can thus be read as a call to action that, from experience, will end in death."

Kounellis began his artistic education at the Athens University of Art. In 1956, at the age of twenty, he emigrated due to the tense political situation to Italy where “Iannis” became Jannis. In Rome he was able to carry on with his discontinued art studies at Accademia di Belle Arti. During his first years in the city he primarily created writing, number and letter paintings. These paintings resembled performances as Kounellis would sing the painted letters and numbers simultaneously. In 1960 his works were exhibited at Galleria La Tartaruga in Rome. Kounellis increasingly turned towards performance art and from 1963 began to integrate potato sacks, junk, earth, wood, wool, glass and coal into his works. From 1967 he became a founding member as well as the most important representative of the Arte Povera movement. Characteristic for Kounellis works was the juxtaposition of natural organic materials such as stone, coal, wool and hair with found, pre-fabricated objects such as beds, wooden pallets and iron plates. In 1972 Kounellis took part in the documenta, in the same year his first solo exhibition was held at Sonnabend Gallery in New York.