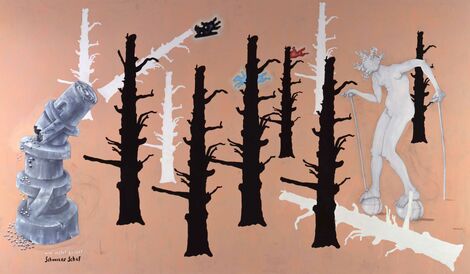 “The large-scale painting Who rides too late … Black sheep from 1999/2000 presents itself in a surrealist manner. To the right the well-known nude on crutches and balls has been placed. Here, she has a globe in place of a head which is embellished with allegorical figures like a crown. We see five white and six black, seemingly dead trees, between them a black, a red and a blue knight materialize on the wide stage. To the very left appears a Babylonian tower that figures several times in the artist's later oeuvre and bends off in the upper third towards the nude on the right. The title refers to Goethe’s Erlkönig poem: “Who rides by night in the wind so wild? It is the father with his child…” Or rather, in the context of the chosen title: “Who rides too late will be caught by death” in reference to the black rider on top who crashes against a white tree.”

Jörg Immendorff first studied set design with Teo Otto during the 1960s at Kunstakademie Dusseldorf and switched into Joseph Beuys class in 1964. In 1969 he was expelled from the Academy due to his provocative neo-Dadaist art performances. After having worked as an art teacher he decided in 1981 to establish himself as an independent artist.

“In his oeuvre that is shaped by the politically-charged climate of the late 1960s, Jörg Immendorff focused on interrogating art in relation to the social. With this critical analysis he aimed to determine his own position as an artist within bourgeois society. He investigated the postulation that art should permeate life by critically examining both. For this reason Immendorff did not consider himself to be an outcast standing removed from reality. Rather, he understood his artistic practice as a means to work within society by observing its processes while at the same time shaping them. The point of departure was an activist self-image in which the artwork functions as political action. Thus, the picture was never just painting but also a poster, flyer, comic or display.

The ideological rhetoric of his pictorial language at times led to Immendorff’s paintings to be interpreted as simple renditions of the pictorial object. During the 1970s the artist abandoned such political atavisms in order to concentrate on painting instead. All the while he did not give up on the social focus and ambition of his work.

This change took place with the work on the Café Deutschland series in which the painterly manner appears to be freer and the use of colour more expressive. In these images Immendorff stages the contemporary events of a fictional German-German theatre play no one could have known was to become reality ten years later.

In contrast, the development of the final years is less biographical and more characterised by a “clearing” in the sense of pictorial ease which the artist himself once described as a “release”. The immediate connection with reality is displaced in favour of individual emblematics that take the viewer trying to decipher them away from the realms of reality without however prescribing a definite direction.”