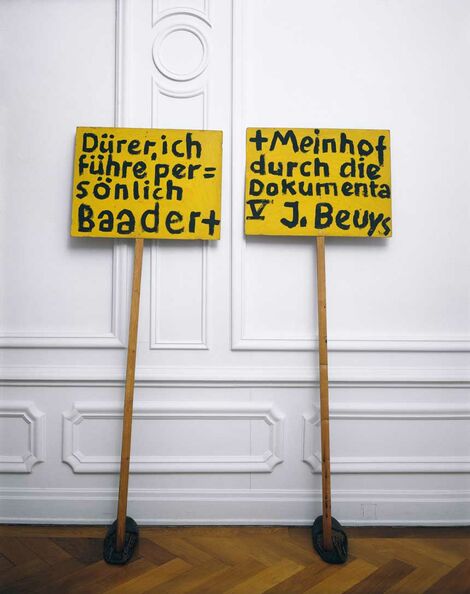 “Standing in fat-filled slippers, the Baader-Meinhof boards are the result of an encounter between Beuys and the performance artist Thomas Peiter at documenta 5 in 1972. Disguised as Dürer, Peiter had interrupted the press conference at the opening of documenta with a spontaneous satirical speech. The words addressed to “Dürer” were spoken by Beuys while Peiter produced the boards. To Beuys, this intentional provocation had little to do with sympathies towards Andreas Baader and Ulrike Meinhof, then wanted as RAF terrorists, but rather was a means to point to their misguided creative potential.”

In 1947, Beuys began his studies in the sculpture class at Kunstakademie Dusseldorf and after three semesters switched over to the class of Ewald Mataré whose master student he became between 1952 and 1954. In his work he addressed notions of humanism, social philosophy as well as anthroposophy in this way developing his “expanded concept of art” and the idea of “social sculpture”. According to him art should entail human actions that are directed towards structuring and forming society, it should question its own changed existence and meaning in a contemporary context. His concept of art is much wider than the object.

“Much has been said and written about Joseph Beuys, the works as well as the man. More than about any other artist after 1945. His work is at the centre of discussions. Any time the artist took part in any of the large international survey exhibitions of recent years, these discussions almost always led to a fundamental dispute about art.  The artist, who had placed himself in this public, had become an authority. During the years […] that followed Joseph Beuys death these discussions have not ceased. On the contrary, the interest in and questions about his oeuvre, the bedrock of his world fame, are on the rise. Joseph Beuys unique position in the arts had been recognized. Were his pieces not the most extreme of all imaginable counter positions? Joseph Beuys possessed the strength to question traditional notions of art and to advocate a new anthropological dimension of art within a radically expanded art concept. Man stood at the centre of the artist’s reasoning – the creation of a “social sculpture”. To this day, this insistence on fundamentally different ethnical concepts for new ways of life remains for many people, in its full magnitde, still difficult and hard to grasp.”