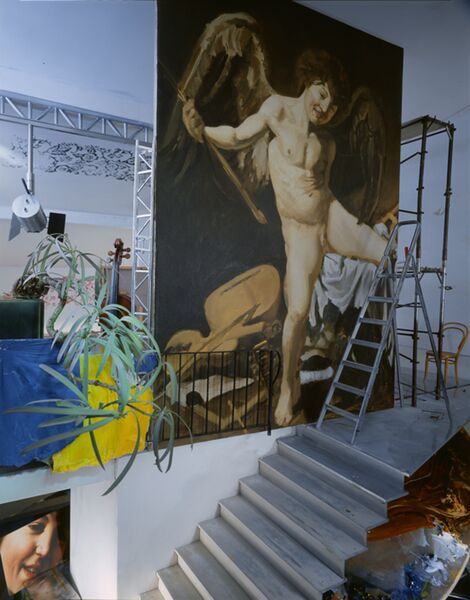 “There are many autobiographical references in the oeuvre of Lois Renner. Specific objects such as the fire extinguisher and the ladder keep reappearing in his images. They represent memories of objects that were present in his earlier studio or his parents’ home. Renner’s works can be interpreted as portraits of his former surroundings, a period that he has since left behind and which now is present as spatial model and in photographs. With the endless variations on his former studio the artist shows us the creation of his real living environment which at the same time encapsulates the longing for ideal images. By constructing his model spaces Renner creates his own internal realties that resemble stage sets. Just like the stage set of a theatre is impermanent so do the constellations of each of his model creations remain short-lived. Far from rigid and imperishable they are subject to constant change.”

Lois Renner
born 1961 in Salzburg
lives and works in Vienna

After an apprenticeship as a sign writer Renner attended the Austrian Master School of the Painting Trades (Meisterschule für österreichisches Malerhandwerk) in Baden near Vienna and later began his studies at Mozarteum University. In 1995 he changed over to the Kunstakademie Dusseldorf where he studied painting with Karl Kneidl, Rissa and Gerhard Richter. In 1992 he was the youngest contestant to receive the Monsignore-Otto-Mauer-Prize, the most prestigious Austrian art prize. Today Lois Renner is considered to be one of the most important contemporary Austrian artists.

“Louis Renner’s artistic approach is comparable to scientific method. His interest does not cease to circle around the model of a studio, which one could describe as “Ur-cell”. This refers to his artist studio which he rebuilds on about one cubic metre corresponding to a scale of 1:10. On this model he incessantly tests variations and scenarios, takes countless trail shots and experiments with light situations and room setups. The resulting interior arrangements are photographed and staged from various angles. In these the artists often varies his distance from the model in order to enable extreme close-ups as well as views from a wider distance. Especially these differing camera positions lead to disruptions of viewing conventions since the purpose is never the formal relationship between objects but a play on the perception of real and fictional. In the fashion of the Old Masters he carefully prepares his experimental setups but nevertheless trusts that all planning will lead to something fresh, agile, light and fascinating.”