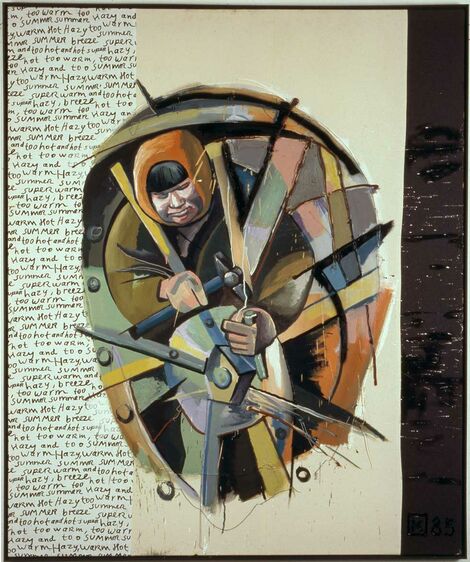 "One of the achievements of socialist rural collective farming, short “Kolkhoz”, was the introduction of heavy technology in order to cultivate husbandry. “Fordson-Putilowez" tractors with iron wheels such as the one the farmwoman is repairing with hammer and iron rivet, were produced in the Soviet Union from 1924 to 1933 after US-American models. The “Female Tractor Driver” campaign advertised heroines of labour and at the same time was intended as a model for progress and equality.

The cynicism of the campaign pairs up well with Kippenberger’s preference for irritation and provocation. During the early 1980s the artist used not just the formal language of agitation and propaganda which has since become part of youth culture. The tractor’s iron edging breaks light into a colour range reminiscent of avant-garde artists such as Robert Delaunay. In the middle of cubo-futuristic forms the tractor driver appears inside a bubble on an empty canvas. The symbols of the social as well as artistic avant-garde are framed to the right of a black stripe. To the left fragments of sentences and word strings that describe a warm summer and a fresh breeze repeat themselves while the woman, that Kippenberger refers to as a “Kulturbäuerin” (“Cultured farmer”) works dressed in a heavy jacket and headscarf."

After his drug-taking led him to prematurely quit a decorator apprenticeship, Kippenberger studied at the University of Fine Arts Hamburg from 1972 to 1976. Afterwards he moved to Florence and in 1977 got to know artists like Werner Büttner and Albert and Markus Oehlen. One year later he moved to Berlin and established Kippenbergers Büro together with Gisela Capitain – an exhibition space for young artists. Furthermore, as the manager of the event space SO36 he organised concerts and events, especially for the then-active punk scene. On the side he continued working as an artist.

In 1980 he attempted to establish himself as a writer in Paris and in the following years took part in different group exhibitions. During this period many of his own works were created alongside collective pieces with fellow artists. In 1986 his first comprehensive museum exhibition “Miete Strom Gas” was held in Darmstadt.

In 1988 Kippenberger took part in the Venice Biennale. In 1990 he served as visiting professor at Städelschule in Frankfurt and in 1992 gave guest lectures at Yale University and at the Universities of Nice, Amsterdam as well as at the Gesamthochschule Kassel.

As early as 1989 Kippenberger had moved to Los Angeles permanently where he was in contact with many American artists and started a large collection of contemporary art. In 1996 he was awarded the Käthe-Kollwitz-Prize and in 1997 took part in Documenta X and in Skulptur Projekte in Münster. His works were shown alongside Candida Höfer in the German pavilion at the 50th Venice Biennale.

Kippenberger’s multifaceted oeuvre covers painting, sculpture, installation, happenings, photography as well as book publishing making him one of the most versatile and productive German artists of the post-war period. His work belongs to the Neue Wilde (“Young Wild Ones”) movement that in the tradition of Dada and Fluxus deconstructed old notions of art using modes of ridicule, cynicism and provocation. Social standards, the art world as well as contemporary art’s potential to express itself and to exert influence were examined critically. In the art scene Kippenberger was considered to be a provocateur, an energetic rebel who with his loud entrances and tendency towards self-dramatization was often the talk of the town.