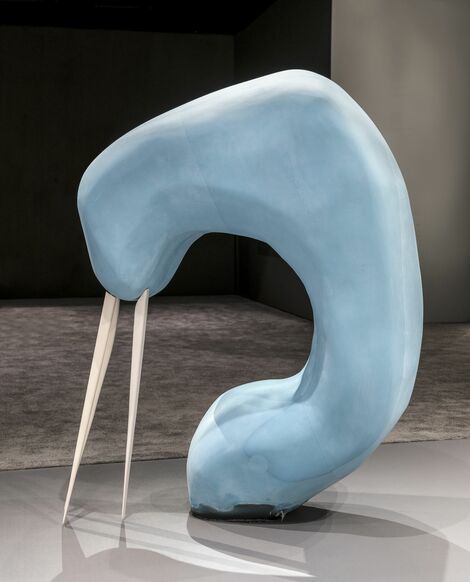 With the group of Stay Downers from 2016 the artists revisits her important earlier group Class Reunion (2008) in the context of her retrospective at S.M.A.K, Ghent and Walker Art Center. The latter presented a group of gangly, mostly black and white sculptures made from materials varying in shapes and textures. Their names such as The Slacker or The Dandy referred to the different social identities one might take on in the context of a school class. At the same time the name alludes to social and economic structures as well as the human desire to classify. In her current work Baghramian adds to this idea with a group of lower, pastel-coloured, rounded sculptures constructed from different elements which seem to perform a sometimes awkward balancing act. These are the Stay Downers made from the discarded materials and ideas of the former group. Their titles such as Scallywag, Maverick, Slowpoke, Grubby Urchin, Class Clown, etc. allude to the group of students that have been held back or are perhaps excluded from the Class Reunion due to their failure to finish the school year. Quite literally “staying down” there seems to be an unease in how they take up space. While with the Class the focus is on the idea of fabricated identities and individualities, the Stay Downers shift the viewer’s focus towards the marginalized and their coming to terms with space. At the same time Baghramian engages in a self-reflexive act of examining the left out concepts and spaces in her own oeuvre.

Nairy Baghramian
born in Iran
lives and works in Berlin

Nairy Baghramian was born in Iran in 1971 and has lived in Berlin since the age of thirteen. In her mostly sculptural installations the artist investigates notions of exclusion both spatial and cultural. She is especially interested in the politics of domestic and interior spaces and the role they have played for female and homosexual designers which were often excluded from the male-dominated sphere of public architecture. Her figures, made from a range of materials, allude to the human body and its gestures yet remain abstract. They add to, question and subvert institutional spheres and narratives.

The artist regularly takes part in curatorial projects i.a. at the Neuer Aachener Kunstverein (2008) or the Museum Abteiberg, Mönchengladbach (2018).