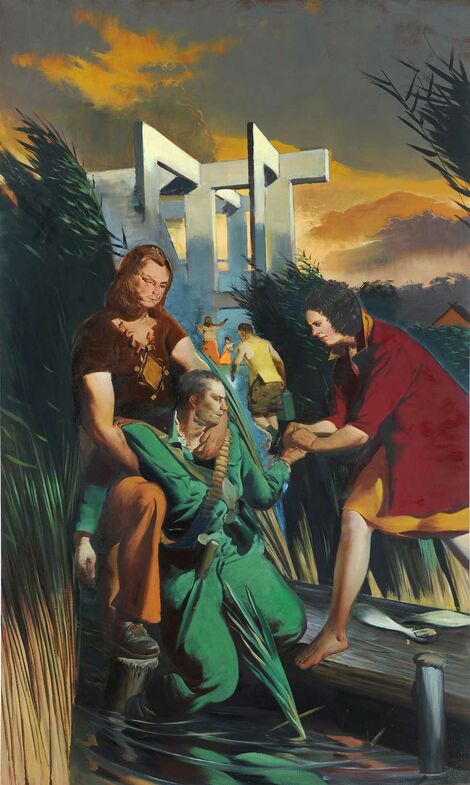 Der Geborgene was painted by the artist on the occasion of his exhibition at the German Embassy at Palais Beauharnais in Paris in 2010. It was on show together with three other paintings.

In Der Geborgene we see how a warrior is saved from a reed marshland. According to the artist, the reed symbolises a transitory zone from liquid to solid, conscious to unconscious. While these areas are very fertile, they are also very dangerous and may lead to one’s downfall.

Neo Rauch
born 1960 in Leipzig
lives and works in Leipzig

“Neo Rauch’s images resemble world theatres, they are scenic overlaps that mark their verism of form and sequence of narrative with a surreal imprint. After the political changes of 1989 and the social-political upheavals in Eastern Germany, Neo Rauch primarily created paintings that revealed the changes of landscape and the demontage of an artificially maintained economic system. Shortly after, scientists, artists and para-military service personal began to appear. While the pieces until the late 1990s focus on drawing components, later on painterly characteristics and an exceedingly colourfull pallet become more important. He also added more personas to his repertoire. Scattered English landed gentry, Biedermeier bonvivants, activists outfitted for an expedition sleepwalk through worlds in which plots and spaces melt into each other. The aims of these protagonists, who appear to resemble robot-like creatures and toy figurines, remain in the dark.

Rauch creates images in the tradition of the Leipzig school, that was dominated by Bernhard Heisig and Arno Rink for over two generations. Drawing from the classic fundus of iconography gives over to subjective form making and leads the viewer via the narrative towards the mysterious. There he looks out for his own landmarks in order to find his way into overlapping image layers.

Neo Rauch’s distinct paintings come from an art historical tradition that goes back to Tizian, Tintoretto or El Greco. The artist himself names Beckmann, Bacon, Beuys and Baselitz as modern references. Neo Rauch’s oeuvre mirrors the complexities of our present where confident can-do attitudes meet a deep insecurity in global imbalances. Media euphoria and media vexation define images of schizophrenia while a fear of terror and catastrophe nurishes the desire for security and contemplation.”