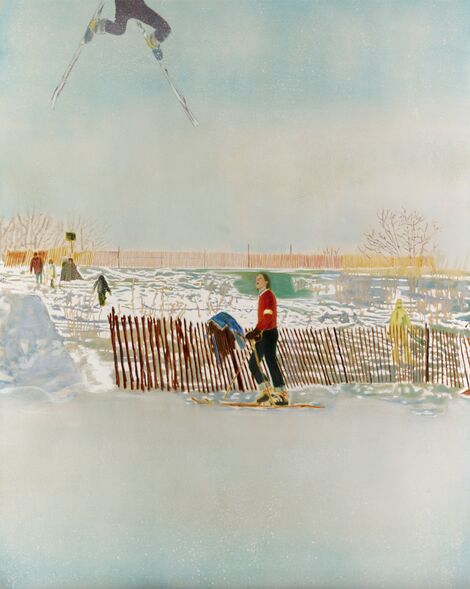 “An example for an extraordinary turn of events: the skier is about to leap off a slope and land further below on the snow. We conclude from this that not just the skier but also gravity have become active, as would be logical. A similar situation that Doig has pictured in Olin MK IV remains puzzling in a humorous way. Was is there to see? The skier seems to be stuck in the upper image corner, an effect of great significance which might also be seen on a photograph that has been cut off or is covered by a frame at its edges. Even though we may be aware that images “capture” living forms in any direction, we still recognise a comical effect, similar to the reaction of the camera to a misshapen circus act. But more happens in the image. Doig renders the snow’s white colour in a way that defocusses, clouds and disguised the marginalised figure of the skier as if he was living in another world than the one on the ground inhabited by the figure in luminous red. On the painting surface the material texture takes on as many varieties as colour tone and value. What may have been an incidental instant of a filmed or photographed episode – the snow – now demands the same attention of our senses as the supposed main motif, der skier. From the perspective of a conventional narrative structure painting – Peter Doig’s painting – creates an unstable present, a moment extended into eternity by the complex perception of it opaque material substance. This moment is always more than a moment.”

After growing up in Trinidad and Canada, Peter Doig decided in 1979 to move to London where he studied painting between 1980 and 1983 at Wimbledon School of Art as well as St Martin’s School of Art. From 1989 to 1990 he studied at Chelsea College of Art and Design. From 1995 to 2000 he worked as a curator at Tate Gallery in London and moved to Trinidad in 2002 together with his family in order to completely focus on painting. From 2005 to 2018 he was a professor of painting at Kunstakademie Dusseldorf.

“Doig’s paintings on one hand reference the history of painting and on the other hand are deeply rooted in everyday life. Starting points for his paintings are often travel brochures, newspaper images, film stills or private snapshots. They represent the different environments and societies the artist has lived in: the frozen lakes of his Canadian childhood, the glittering metropolis London and finally the Caribbean landscapes and urban sceneries of Port of Spain on the island of Trinidad. In his paintings, whose calm seems to tip over at any moment, memories, biography, popular images and narration condense into dreamlike sequences.”