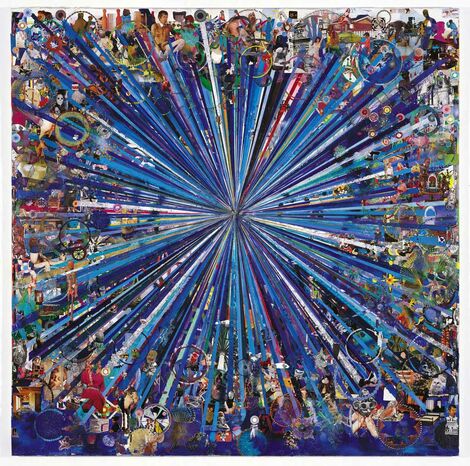 ADIEU INTERESSANT (blue) is a large-scale collage that encompasses “image materials that have been assembled over a period of 15 years. This treasure trove of images ranges from porn zines to advertising brochures of German Railway […]. According to Tal R he did not focus on themes or aesthetics when choosing his material but rather followed the instinct of his collecting hand. Ripped from their context these images almost drown in the collage’s visual flood; the viewer’s eye is unable to grasp them in their entirety but wanders from one detail to the next, losing itself in the layers and structures of the images. Tal R compares his images to shimmering crystals and refers to them as visual landscapes. Layer after layer, grown over several years, they soon develop a dynamic on their own. The artist has described them as greedy, even gluttonous. No matter how much material he would feed the collages, he recollects, they would only smile and demand more.”

Born in Israel as the son of a Danish mother and a Czech father, the family moved to Denmark after half a year where Tal R grew up and studied between 1986 and 1988 at Billedskolen Copenhagen. After having worked as a teacher from 1991 to 1993 at Nut Cracker- Art School in Copenhagen he decided to begin his studies at the Danish Royal Academy of Fine Arts, which he completed in 2000. In the same year he was guest professor at Helsinki Art Academy and in 2001 was awarded the studio fellowship of the city of Mönchengladbach. After starting a guest professorship at the Academy of Fine Arts Hamburg in 2003 he took over a painting master class at Kunstakademie Dusseldorf in 2005.